This March hosted our first Saws event of the season.  This is the first year we attempted a formal event in the month of March.  Obviously, the weather in the month of March is a huge risk.  There could be significant snow cover or active snow that would make us need to cancel.  However, as it happens we had a BEAUTIFUL day to do the work this March, and the snow cover from the previous few weeks had mostly melted.

I called it a “Mini-Event” because we were only working on one property, but the task was not “mini” in any sense of the word!  Our work was to clear a steep hill of slash and boles (logs) that were felled last summer.  The material was not very deep and spread across the hill.  While it didn’t look like a lot of material, it was a lot of work.  Fortunately, we had support from a great group of teenagers and leaders from Nederland Community Presbyterian Church and their mission partners from Pueblo.  We had 27 volunteers lined up on the hill passing the slash up the chain of people to get it to the top of the hill.  Even with the long line of people, getting the little pieces to the top was hard work!  We made a huge dent in a huge project to remove fire fuels.

After we chained the slash up the hill, then we chipped the pile of slash and hauled off the firewood.  We learned some lessons and made adjustments to our methods along the way, but it was a great day of hard work and camaraderie.  It was perfect for a first event of the year.  Here is to a season full of more events like this one! 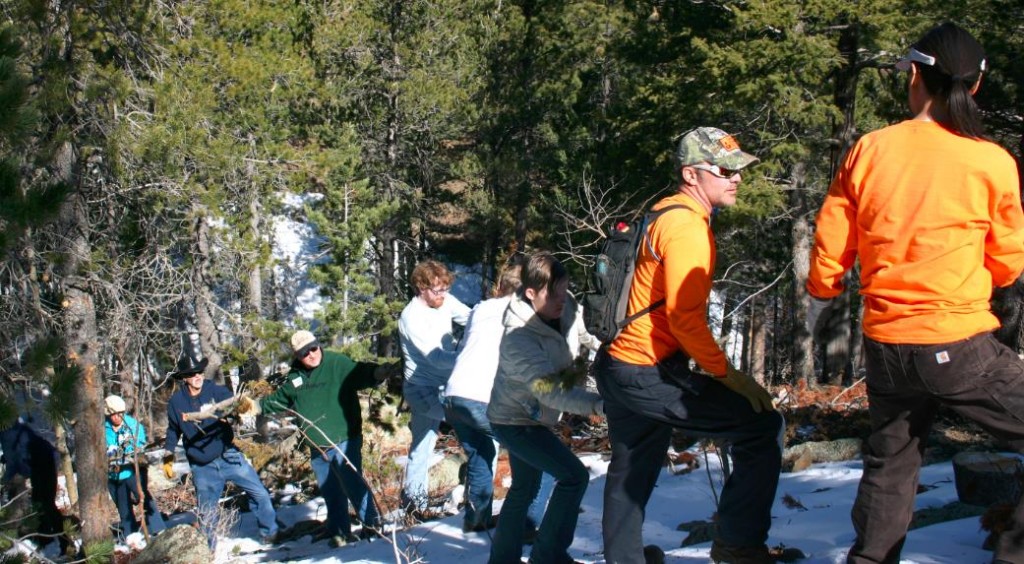